Ushma Devi from Khunti district of Jharkhand belongs to poor family background and her entire family was dependent on her husband’s income, who works in a brick kiln. She has two daughters including an old Father-in-law and mother-in-law in her house.  Both of her daughters studying in a nearby government school. Her husband works in brick-kiln only in the summer and winter season and during the rainy season, he remains jobless. And in that period family members face a tough time for their survival.

The income of her husband was not sufficient for entire family members and they were facing hardships in their life due to scarcity of money. Before joining the programme she had undergone a digital literacy programme which equipped her to become a Digital Sarthak when the opportunity arrived. In this project, she received a smartphone and a printer to provide training as well services to the community. Through this project, she is training 100 women entrepreneurs on digital literacy which will also provide her with a credible stipend for her work. 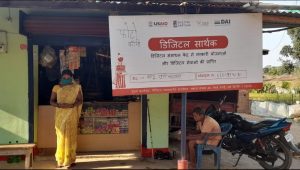 The programme has helped her in contributing to the household livelihood as well as improved her understanding of digital literacy. Reaching out to the women and travelling across the villages has boosted her agency and she is now a confident woman in the community.

Previously she had a limited understanding of smartphones but the after receiving the training by DEF master trainers, she has learnt a lot and is capable enough to provide training to women entrepreneurs.

Also, earlier, she had limited public contacts and nearby households knew about her. But after she is appointed a Digital Sarthak entire, she is a well-known person in the community.

Expanding Customer Base Through WhatsApp
October 21, 2021